KOTA KINABALU: Visitors to the newly launched Wonders of Wilderness (WoW) 1.0 exhibition centred around marine species and ecosystems are encouraged to come and view the art project from a different perspective.

Project lead artist Japson Wong, a marine biologist, said instead of looking at the items on display as mere artwork made of recycled materials, they should dwell on the meaning behind it as well.

“This project encourages all of us to appreciate art and also increase our awareness on marine conservation through these installations,” he said during the launch of the project in the city on Sunday (Jan 16).

He said the WoW 1.0 project, which will be on display at the former colonial Lands and Surveys Office building in front of Suria Sabah Mall until Jan 15 next year, was inspired by Sabah’s rich marine heritage and diversity.

Wong said the exhibition shows among others, 20 life-size sculptures made with polycarbonate and fibreglass as well as murals of Sabah’s coastal villagers and marine species.

“We want to showcase how marine life is and how the people of Sabah, especially coastal communities interact and live harmoniously with our marine species,” he said.

One of the main artists for the project, Rosmaini Sunarjo explained that the project was built on the rectangular site, which signifies Sabah as a state, with its ‘insides’ portraying the wonders of nature that the state has to offer.

“If we take a closer look inside, there are several stickers with the words ‘fragile, handle with care,’ written on it and this is a reminder for us to take good care of our state, our environment and our sea,” he said.

Rosmaini said the floor, painted to look like the seabed from the inner depths to the shallow parts of the shore, created a sense of “awakening”.

“It shows how we will be able to rise up and breathe again,” he said.

Sabah Science, Technology and Innovation minister Datuk Yakub Khan, who officiated the event, said the project would encourage more artists to come out and showcase their talents, diversify their creativity and most importantly, create awareness on marine life.

“We will be able to learn about the effects of unsustainable developments, industrial activities and uncontrolled economic programmes,” he said. 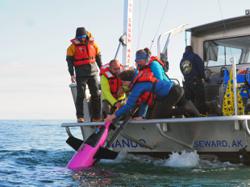