State Commercial Crime Investigation Department Supt Aibee Ab Ghani said the victim had received a call from a woman on Wednesday (Dec 29) claiming to be an officer from another bank.

"The victim was told that a sum of RM4,663 had been used from her credit card to buy Bitcoin.

"The call was then apparently transferred to an individual who identified herself as Sarah from Bank Negara," he said.

Supt Aibee said 'Sarah' told the victim that she was being probed as several questionable transactions had been carried out under her name.

The call was again transferred to a male suspect who asked the victim for her banking details, including all her other credit cards.

She was also told to change the personal identification numbers at the ATM.

"The victim willingly gave all the information without realising it was a scam," he said.

The case was being probed under Section 420 of the Penal Code for cheating.

The offence carries a jail term of between one and 10 years, whipping and a fine upon conviction. 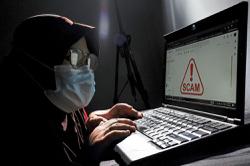