KUCHING: The Sibu Municipal Council has threatened to remove party flags or election billboards if they are found to obstruct traffic and endanger road users.

Its chairman Clarence Ting said the council enforcement would remove the items without informing political parties.

“Irrespective of which party, we will take down their billboards or flags if there is still no action taken to remove or relocate these items which pose danger to road users,” he said on Thursday (Dec 9).

Ting said the council received several complaints over the matter from the public, including claims that their vehicle tyres got punctured due to nails left on the road by workers putting up the flags and billboards.

“There were also those who stuck the flags onto the trees, which could damage the trees. Please do not place party flags on the trees,” he said.

Ting pointed out that it was the responsibility of the parties to ensure that their flags and billboards do not endanger the public.

He said the council's enforcement team had been instructed to check on any violations. 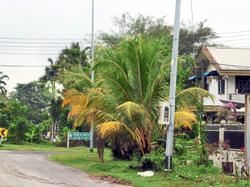