KOTA KINABALU: Petronas is giving Sabah up to 25% share at cost without premium in liquefied natural gas projects via its subsidiaries.

This follows the commercial collaboration agreement (CCA) signed between Petronas and Sabah on Tuesday (Dec 7), where payments would be made via deferment or dividends from the projects involved.

Chief Minister Datuk Seri Hajiji Noor said Petronas was committed to providing cash payment from oil royalties and sales tax as part of the effort to give more back to Sabah from the oil and gas sector.

He said through the CCA, Sabah would enjoy greater revenue sharing, greater participation, and more say in the sector.

"I know the issue of Sabah rights especially on the special allocation grant for Sabah is close to our hearts but rest assured that as the government of the day, we will not stop fighting for what is ours," he said during his winding-up speech at the state assembly here on Thursday (Dec 9).

He added that a special committee to discuss this special grant had also been formed to continue negotiations with the Federal government.

Hajiji said at the launch that the incorporation of SMJ Petroleum Sdn Bhd was expected to help turn the state into a strong player in the industry, while getting the guidance needed from Petronas. 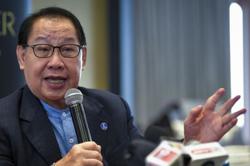