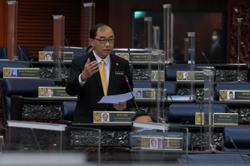 THE number of school dropouts was reduced by more than 10,000 during the Covid-19 pandemic period due to a concerted effort by education authorities, says Deputy Education Minister Datuk Dr Mah Hang Soon.

“Based on statistics, a total of 11,301 school dropouts were recorded between March and December last year while a total of 10,015 students dropped out of school between January and July this year.

“This brings the total number of dropouts from March last year to July this year to 21,316 students, as given in the written reply to Kangar (Noor Amin Ahmad, PH) the other day.

“This means that the number of dropouts between March last year and July this year was lower than in previous years,” he said in reply to a question raised by Syed Saddiq Syed Abdul Rahman (Ind-Muar) in the Dewan Rakyat yesterday.

Syed Saddiq had raised concerns over the high number of dropouts, claiming that it was a national emergency.

He wanted to know the steps and intervention measures taken to prevent school dropouts.

Dr Mah said efforts were made at the ministerial, state and district levels to identify potential students who might cease their studies.

These efforts included intervention, counselling and guidance programmes after identifying students at risk of dropping out of school, he added.

“These steps also include involving parents, the community and private sector to lower the risk of dropouts,” he said.

Earlier, to a question by Nik Mohamad Abduh Nik Abdul Aziz (PN-Bachok), Dr Mah said the ministry had implemented a curriculum empowerment programme, KPMPerkasaKU, in September to focus on literacy among students.