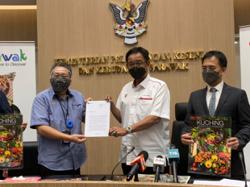 KUCHING: Tourism is an important sector in Sarawak and Kuching must bank on its recent recognition by the Unesco Creative Cities Network (UCCN) as “Creative City of Gastronomy”, said Gabungan Parti Sarawak candidate for Padungan Datuk Wee Hong Seng (pic).

Wee, the current Kuching South Mayor, said if he is elected as Padungan assemblymen, he would make the constituency a tourist attraction.

“Looking at the building architecturally, Padungan itself can be a tourist attraction area,” he told The Star when met in Kuching on Tuesday (Dec 7).

“Two weeks ago, the Kuching South City Council took the lead and managed to get into the UCCN list.

“The centre of gastronomy should be here (Padungan), so we can attract more people to come to Kuching.

“We are very happy that amongst the 200 countries, Kuching made it into the list.”

Padungan is located in the heart of Kuching.

Sarawak has two Unesco recognitions, with the other being the Mulu National Park in Miri, which was recognised as a Unesco World Heritage site.

Aside from making Padungan a tourist attraction, Wee also said if he is elected, he will ensure that the ageing population in his constituency would be cared for.

“We have to prepare for the ageing society, so we need places for them to relax and gather around.

“This is our plan and we are going to fulfil it if we are elected.”

Admitting he was new in politics, Wee said he wasn’t afraid of his opponents, as he was born and bred in Padungan.

“We are familiar with locals here and we know each other,” added Wee.

Wee also urged his opponents not to resort to dirty tactics during the 12-day campaigning period.

“This is a new experience for me ... For me, personal attacks are unnecessary and don’t spread fake news,” he added.

Early voting for Sarawak will take place on Dec 14 while polling on Dec 18.