Moyog assemblyman Datuk Darell Leiking said these industries were new but were very much talked about, adding that neighbouring countries like Singapore, Thailand and Indonesia have ventured into growing these crops.

"We must be brave to move into these industries because countries like Singapore have moved into packaging of medical marijuana while Thailand has gone into industrial hemp and medical cannabis crop production.

"We must also look into this or we will be left behind," said the Parti Warisan Sabah deputy president at the state Legislative Assembly meeting on Monday (Dec 6).

He said Sabah used to have an Abaca industry in Tawau many years ago, which was part and parcel of industrial hemp.

He said Sabah was suitable for these crops as its soil contains volcanic ingredients, which helps to produce better quality industrial hemp.

Earlier, during his debate speech, Leiking said Sabah should no longer be seen as just an agrarian state, but a state capable of producing premium agricultural products.

"My opinion is that Sabah can never beat Philippines and Indonesia in terms of production by volume, but we can compete in terms of quality and standard of products produced," he said.

He also said it was vital for the government to allocate more funds for the research and development of artificial intelligence (AI), and subsequently its development for agricultural development.

Leiking also suggested for the government to re-look at the Nature Conservation Agreement where the carbon deal is involved, and to bring investors into Sabah instead of selling off carbon credit to outsiders.

"Blue carbon is another sector we can seriously consider. We have an abundance of land and sea and we have things we can share with the world but we must bring it to Sabah and certify them with our own regulatory body," he said. 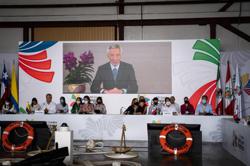