SPAOH: Veteran assemblymen of Parti Pesaka Bumiputera Bersatu (PBB) who have voluntarily stepped down in the 12th Sarawak election are great servants of the party and state, says Datuk Amar Douglas Uggah Embas.

The PBB deputy president thanked the veterans for their service in the many years they had been elected representatives.

"We are really appreciative of your services to the state and nation. The current senior members are still contesting, I believe they too will step down when they feel their time is due," he said

"This is part of the growing process for the party," added Uggah here on Saturday (Dec 4).

Among the PBB reps who have stepped down in this election was Datuk Amar Michael Manyin Jawong, who had been the Tebedu assemblyman since 1996.

Meanwhile, Uggah said PBB’s decision to nominate several young candidates in this election was a normal practice for the party in every poll.

"We need to groom new leaders to face an even more challenging world. They have to gain the experience, for instance, in vital decision making, in dealing with crises themselves along the way," said Uggah.

"The new crop of leaders are technology savvy too," he added.

Uggah would be defending his Bukit Saban seat, which he first contested in 2016 after moving from his parliamentary seat of Betong. 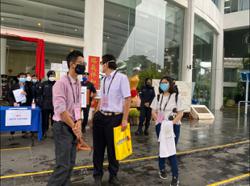