File photo of the Royal Malaysian Air Force (RMAF) Hawk 108 jet fighter that crashed at the runway of the Butterworth airbase at about 10.07pm on Nov 16. - LIM BENG TATT/The Star

KUALA LUMPUR: Royal Malaysian Air Force (RMAF) pilot Maj Mohd Fareez Omar who survived a Hawk 108 crash in Butterworth, Penang on Nov 16 is reported to be stable and is still being treated at Seberang Jaya Hospital in Penang.

On whether Mohd Fareez would be discharged, he said the MAF is unable to decide as Mohd Fareez is still receiving treatment.

"Apart from that, the special committee is still investigating the incident involving the aircraft before taking any followed-up action. All matters require comprehensive study,” he said.

He was speaking to reporters after attending the launching ceremony of MyVeteranMall application here on Tuesday (Nov 30).

In the 10.07 pm crash, RMAF pilot Cpt Mohamad Affendi Bustamy was killed while Mohd Fareez was injured after the fighter jet they were flying crashed during a flight training on the runway of Butterworth airbase, Penang.

Meanwhile, commenting on MAF’s preparation for the monsoon season, Affendi said MAF is in a state of preparedness in each zone for any eventuality.

He said MAF members and assets would be mobilised for monsoon duty according to requirement.

"How many personnel and assets I cannot say but I can say MAF is on full alert,” he said.- Bernama 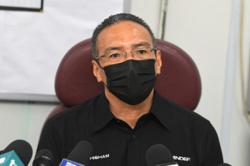