SEPANG: There are 120,000 foreign workers in the plantation sector registered under the recalibration programme but it is still insufficient to meet the labour demand, says Datuk Seri Hamzah Zainudin.

The Home Minister said the number could only cater to 20% to 30% demand for foreign labour in the plantation sector.

"That is why 32,000 foreigners would be brought in to help ease the shortage.

"While we have allowed additional foreign workers to be brought in to help overcome labour shortages, as of now, not a single worker has entered the country,” he told a press conference after launching the expatriate service division satellite centre at KLIA on Tuesday (Nov 30).

Hamzah was addressing questions raised by certain quarters on why the government was still allowing foreign workers into the country when more than 200,000 have already registered under the labour recalibration programme.

According to a quick-take survey by National Chamber of Commerce and Industry Malaysia, the plantation sector is short of 70,000 workers.

Hamzah did not state why the foreign workers meant for the plantation sector had yet to begin their employment.

The minister said due to the pandemic, strict standard operating procedures have been put in place prior to the arrival of these foreign workers.

“All measures are in place, including quarantine upon arrival to ensure they are free from Covid-19. Those who are ill will be isolated and given proper treatment before they are released to their employers,” he said.

In June 2020, the government announced a freeze on hiring foreign workers in all sectors, with locals given priority to fill such vacancies. 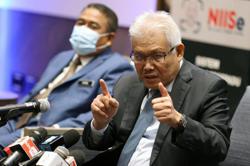