FROZEN delicacies from Bentong, Pahang, have become instant hits across the country and have given a new lease of life to hawkers and restaurants, reports China Press.

Tourism in the area ground to a halt during the earlier movement control order and forced local businesses to start thinking about how to get their products out to customers.

Many started adopting freeze-drying to keep their food fresh and allowed these produce to be marketed beyond Bentong.

One of these enterprising restaurant owners is Zheng Mei Hua.

Zheng started freeze-drying and packaging some of the restaurant’s signature dishes including asam prawns and Bentong ginger chicken to sell online.

Little did she expect that the dishes would become popular online to the point that she now has designated distributors to help sell them in different parts of the country.Similarly, another restaurant also started freeze-drying its food to earn additional income after dine-ins were not allowed during the movement control order.

“Now that dine-ins are allowed again, many tourists to Bentong enjoy lunch or dinner and will often buy some of our frozen dishes to take home. This has provided our restaurant with additional income,” said the restaurant manager Zhang Wen Ben.

The 38-year-old from Muar said one cannot help but laugh when wallowing in despair at certain things in society, which prompted him to write the song.

“That is why I use a sweet and sour way to reflect the current state of society or the situation we are facing now. Those who have fragile hearts and manage to connect with the song, then you’ve got the message of the song,” he said in an interview with the BBC.

Released on Oct 15, the song by Namewee featuring Australian singer Kimberley Chen appeared on the surface to be a tune about a lovers’ spat.

However, a closer reading of the lyrics found that it contained veiled references to Chinese leader Xi Jinping and touched on sensitive topics such as censorship, Covid-19 and the Uighurs.

Although there is no mention of China in the lyrics, the music video had a panda cavorting in the background and the pink-themed setting is seen as a dig at nationalistic Chinese netizens known as Little Pinks.

Just days after the song went online, both Namewee and Chen’s Weibo (China’s equivalent of Twitter) accounts were shut down. 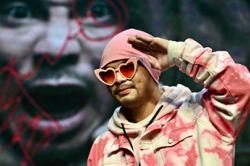