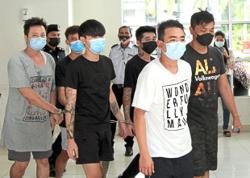 KLANG: Six men were charged in two separate Magistrate’s Courts here over the murder of a moneylender.

On Tuesday (Nov 23), Tan Yong Seng, 38, and Gan Kok Shang, 43, were charged before magistrate Amirul Abd Rashid for abetting four others with the intent of committing murder.

They were accused under Section 109 of the Penal Code, which was read together with Section 302 of the same Code.

Later in the day, the other four men Tan Ah Chai, 27, Yeo Ching Lian, 36, Lau Zi Hui, 19, and Yap Soon Kuan, 18, were charged before magistrate P. Sarulatha under Section 302 of the Penal Code for murder.

All the accused nodded that they understood the allegations against them after the charges were read to them in Mandarin.

Yong Seng and Kok Shang were accused of abetting them at the same location.

If found guilty, all six men faced the death penalty. No plea was recorded.

Both Amirul and Sarulatha fixed Jan 31 for the case to be mentioned.

According to media reports, Phua, 47, was waylaid and hacked to death at about noon on Nov 6 as he was walking to his car after having lunch with his two sons at a restaurant.

Comm Shamsul Amar added that the victim ran, but collapsed shortly after, and died in front of a neighbouring restaurant.

His sons, aged 10 and 18, were unscathed in the incident.

The first suspect arrested was a 33-year-old man who was detained in Jenjarom the same evening.

The deceased also had a police record under the Penal Code.