"What is needed is a Sekolah Keluarga Malaysia or a unity school as a means to foster unity among our children," Bung (BN-Kinabatangan) said while debating Budget 2022 at the committee stage in the Dewan Rakyat on Tuesday (Nov 23).

Bung made the suggestion after pointing out that the current schooling system continued to alienate children of different races.

"There should be a unity school where students from all races share common facilities under one roof.

"This will help them learn about each other in a better way while fostering unity.

"What is happening now is that you have children from different communities studying separately in the Malay, Chinese and Indian schools," he lamented.

M. Kulasegaran (PH-Ipoh Barat) pointed out to Bung that there were already previous efforts to set up unity schools in the country.

"Aren't you aware that there was already the Sekolah Wawasan (Vision School) back in the 1990s," he asked.

Bung said he was aware.

"That is why I am angry.

"There were plans for the Vision School but they were never implemented.

"I suggest the new Education Minister provide a new platform to help foster unity for the sake of our children's future.

"Or they will end up blaming us for failing as parents in fostering unity when we had the opportunity," he said.

Several such schools were set up but the plan was later shelved by Dr Mahathir's successor, Datuk Seri Abdullah Ahmad Badawi.

In 2019, the National Unity and Integration Department proposed to adopt the USJ 15 Vision School here in a move to promote national unity.

The Vision School incorporates a national school, a Chinese school and a Tamil school in separate buildings within a single compound but with shared facilities such as the hall, canteen and playing field. 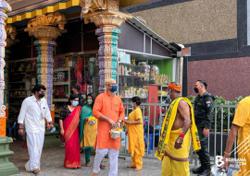