KUALA TERENGGANU: The Domestic Trade and Consumer Affairs Ministry will refer to the deputy public prosecutor to determine the next course of action against a floating restaurant operator in Langkawi who allegedly charged a customer RM1,196.80 for a sea bass weighing 7.48kg recently.

Deputy Minister Datuk Rosol Wahid said the ministry had given an extension until Nov 17 to the operator to respond to the notice given, but still failed to obtain complete and detailed documents to enable further investigations to be carried out.

Accordingly, an investigation paper under Section 53 (A) of the Price Control and Anti-Profiteering Act was opened on the offence of failing to maintain and keep proper business documents.

“The failure of the owner of the premises to submit the required documents such as operating cost and other costs, resulting in further investigations into the possible existence of an element of profiteering could not be carried out accordingly.

“If the trader is convicted of an offence under Section 53 (A) of the Act, the company can be fined RM100,000 for the first offence and RM250,000 for the second and subsequent offences, under Section 57 (A) of the same law,” Bernama quoted him as saying after visiting a rock melon fertigation farm in Kampung Peradong yesterday.

Following the sea bass issue, which went viral, Rosol said the ministry launched Ops Menu operations nationwide starting Nov 6, and as of Saturday, a total of 21 cases had action taken for various offences, with a total compound value of RM6,400. 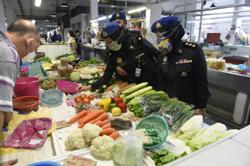 Johor polls: MCMC, telcos to facilitate high-speed Internet requirements, says Annuar
JPJ denies officers involved in 'flying licence' syndicate
Former Sarawak governor Tun Salahuddin passes away
Making it easier for public to vote
Almost half of adults given booster dose
‘Key to avoiding a huge spike is control, management’
How to hold elections during a pandemic
Electricity tariff relief continues
Bill to limit PM’s term to be tabled in Parliament
‘I didn’t kill anyone, I am the victim’