MELAKA: With polling day for the state election here less than a day away, political research firm Ilham Centre has predicted that Barisan Nasional will comfortably win 11 seats, with Pakatan Harapan taking seven.

According to Ilham Centre, Barisan could form the next state government if it could secure four other seats, adding it had identified ten seats which could see surprises.

"It is hard to get an accurate reading from these ten seats due to close fights between candidates," it said.

Ilham Centre added Perikatan Nasional could spring surprises in Tanjung Bidara, Rembia and Bemban due to the strength of their candidates.

"We are seeing Perikatan increasingly stealing votes in these areas," it said.

As the 12-day campaign period comes to a close, Ilham Centre said Barisan appeared to have an edge over Perikatan and Pakatan.

"Pakatan may win if voter turnout is more than 80%, and Perikatan if they are able to break the dominance of Barisan's Malay votes.

"If these two situations didn't happen, then Barisan will prevail."

The survey by Ilham Centre, involving 1,051 registered voters in Melaka, was conducted from Oct 23 to Nov 15.

A total of 112 candidates, comprising 28 each from Barisan, Perikatan and Pakatan as well as five from Parti Bumiputera Perkasa Malaysia and one from Parti Perikatan India Muslim Nasional while there would be 22 independent candidates would contest the Melaka state election. 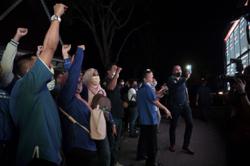