KOTA KINABALU: Sabah STAR president Datuk Dr Jeffrey Kitingan (pic) says he is having second thoughts about the wording on the Bill to amend the Federal Constitution to reinstate Sabah and Sarawak as equal partners.

Kitingan said he has written to de facto law minister Datuk Seri Dr Wan Junaidi Tuanku Jaafar, to give his views that he did not agree with the words on definition of the Federation in the Bill that was tabled in Parliament on Oct 26.

He said that proposed amendments to be debated later this month in Parliament did not reflect Sabah and Sarawak as equal partners.

"I don't want these amendments to be just cosmetics. We don't want to promote it as if these amendments will make us equal partners as when I look at it, it does not reflect it," he said referring to the proposed amendment to Article 1(2) of the Constitution that refers to Sabah as one of the 13 states.

The Bill seeks to revert to the definition of the Federation prior to 1976 which refers to the federation as - Federation of Malaya; B. the Borneo states and C. Singapore.

"So if you want to restore this, excluding Singapore, you would only have A and B. But does it make us equal partners?

"I am suggesting that we make the correction now with the words Malaysia federation consisting of A. states of Malaya; B. the state of Sabah and C. the state of Sarawak.”

The proposed amendment in its current form does not correct anything and did reflect equal partnership, Kitingan told reporters here Thursday (Nov 18).

He said that any amendments should reflect the proclamation of Malaysia on Sept 16, 1963 where it says "the state of Sabah, state of Sarawak, shall be federated with the Federation of Malaya.

"We are federated with Malaya and not with the states of Malaya," he said, adding that Sabah and Sarawak gained self-governance before the federation was formed.

However, he said for him personally as Keningau MP and a member of the state and federal governments, he was in dilemma on whether to support or not the amendment.

"So I can say I disagree on this amendment, but at the end of the day, we only have two choices - to support or not support," he said. 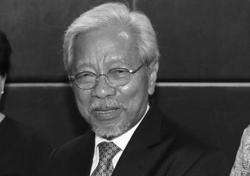