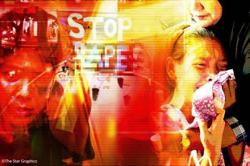 A Proton Saga, an ambulance and a Perodua Kenari got into a crash along KM68.5 Jalan Sg Rengit - Kota Tinggi at around 12.25pm on Thursday (Nov 18), leaving four injured.

KOTA TINGGI: Four people were injured in an accident involving two cars and an ambulance.

Kota Tinggi OCPD Hussin Zamora said that one of the cars in the accident, which took place along KM68.5 Jalan Sg Rengit-Kota Tinggi around 12.25pm on Thursday (Nov 18), ended up in a ditch by the road.

"The driver of a Proton Saga travelling from Kota Tinggi was said to have lost control of his vehicle and entered the opposite lane before colliding with an oncoming ambulance.

" A Perodua Kenari behind the ambulance tried to avoid it by steering to the left, but still ended up crashing into the back of the vehicle.

"The car then veered off the road and into a ditch on its side," he said.

The crash caused both the ambulance and the car drivers to be trapped in their seats. The drivers had to be extracted by the Fire and Rescue Department using special rescue tools. Supt Hussin said the Proton Saga driver, 26, and his passenger, 45, suffered severe injuries from the accident.

"Meanwhile, the 51-year-old ambulance driver from the Air Tawar 1 health clinic and a 37-year-old male nurse, who was sitting at the back of the vehicle, were injured as well.

"The driver of the Perodua Kenari managed to escape unhurt from the accident,” he said, adding that all the injured individuals were sent to Hospital Kota Tinggi for medical attention.

He said the case was still under investigation under Section 43(1) of the Road Transport Act 1987 to find the source of the crash.

He advised road users to drive safely and stay alert on the road. 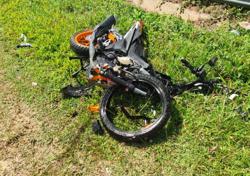