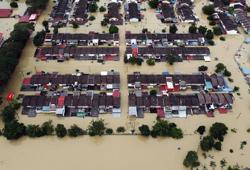 PETALING JAYA: Authorities have checked and carried out maintenance on infrastructure in Penang to ensure that everything is in working order.

This comes as the north-east monsoon, which often sees heavier rains in parts of the country, started earlier this month.

Penang Drainage and Irrigation Department (DID) director Zainuddin Yusoff said that to ensure the safety of Penangites, various agencies had checked and carried out maintenance on hydrology stations, flood warning siren stations, pump houses and tidal control gates or flap gates to ensure everything was working well.

“DID will carry out dredging or desilting on rivers and their mouths every now and then.

“At the same time, DID, the Public Works Department, Penang Island City Council and Seberang Prai City Council will constantly monitor all drainage systems and rivers so that they are free from obstructions that may cause flooding or slow down the water flow,” he said.

Many locations in Penang, said Zainuddin, would be affected should the high tide occur simultaneously with heavy rainfall.

“We have identified 63 localities in Penang that are prone to flooding and we will closely monitor these areas, especially when there is heavy rainfall. At the same time, due to unsystematic drainage and low-lying land, several villages around Penang will be hit harder if the rain intensity is high during hide tide.

“For some areas in Central and North Seberang Prai, the magnitude of the flood would be largely affected by rain from Kedah,” he added.

“As we are facing the monsoon season, there will be strong winds and heavy rains. If the wind speed is too high and the rain is too heavy and affects visibility, we will suspend the service or slow down the speed depending on the situation.

“We will always look out for debris or fallen branches along the railway tracks. We take extra caution and monitor the railway to ensure that it is clear before we move the coaches,” he said.

The upper railway station, he added, had a weather station that was connected to its computer server.

“When heavy rain and strong wind are detected, the server will send an email to our staff so that we can check the main area for fallen trees or branches,” he said.

Cheok said all previous major landslide spots had been stabilised.

“After a heavy downpour, we will check slopes for soil erosion. We will also continue to repair the drains to ensure that they are functioning properly,” he said.

Malaysia Nature Society Penang branch adviser D. Kanda Kumar said the public should not take the current rainy season to be the same as those they used to experience in the past.

“Due to climate change, we should expect heavier and more frequent rainfall.

“This higher level of rainfall will cause an increase in floodwaters in areas prone to flooding. The public must also expect flooding in areas that have not experienced flooding previously.

“Compounding the effects of global warming, we must take into account the high rate of development not only in urban areas but also in other areas that will cause more runoff to low-lying areas,” he added.

The public, said Kanda Kumar, should always stay up to date with warnings issued by the authorities.

“Try and stay indoors if possible during heavy rainfall and if there is a warning for evacuation due to rising floodwaters, follow the instructions given by rescue or evacuation personnel.

“Make sure to pack important documents, wrap them in waterproof material and keep them in a safe or on a higher place at home.

“Those affected should be able to retrieve these documents at very short notice,” he said, adding that the public should also be prepared to stay indoors and have sufficient food to last for a few days in case they are unable to leave their homes due to floodwaters.