KUALA LUMPUR (Bernama): There are 1,474 slopes with moderate to very high hazard identified in five states which may be affected in the northeast monsoon season.

"They were identified through the slope risk and hazard maps of the Works Ministry for slopes along federal roads in Malaysia in 2020,” the Works Minister said during Minister’s Question Time at Dewan Rakyat on Tuesday (Nov 9).

He was replying to a question by Wan Hassan Mohd Ramli (PAS-Dungun) on the preparation of the ministry to ensure roads and slopes with potential for landslides during the monsoon season especially in east coast states.

Fadillah said his ministry is also monitoring slopes along highways especially the Kuala Lumpur- Karak Expressway, East Coast Expressway (LPT) Phase 1 and 2 and the measures were taken as preparations to ensure slopes along the highway are safe.

He said the critical roads were identified through criteria such as alternative roads exceeding 50km, main roads, highland areas, and the number of very high and high hazard slopes and slopes with frequent landslides.

Meanwhile, Fadillah said the ministry with the Slope Engineering Branch (CKC) of the Works Department has installed a landslide Early Warning System (EWS) at locations of risk by using the telemetry system which would give early warning when the rainfall index at the rain gauge exceeds the warning level.

He said there are 48 rain gauge stations nationwide with 36 stations in Peninsular Malaysia and they are installed on federal roads with potential of lanslides such as FT59, FT185, FT4, FT55, FT102 and several other critical routes.

He said the ministry had also attended several series of engagements with the National Disaster Management Agency (Nadma) as well as other agencies in preparing for the 2021-2022 northeast monsoon.

East coast states are expected to face the northeast monsoon which usually starts in October to March next year following several series of heavy rain during the period.

Fadillah pledged that the ministry is prepared for the northeast monsoon each year and all state and district Public Works Department have been ordered to carry out measures and make preparations in terms of manpower, machinery and logistics.- Bernama 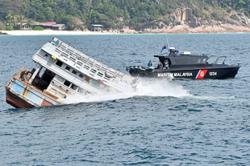