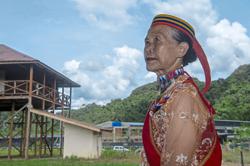 KUCHING: The Bill to amend the Federal Constitution to be in line with the Malaysia Agreement 1963 (MA63) should be tabled at the nearest opportunity now that it has been deferred, says a Sarawak leader.

State Tourism, Arts and Culture Minister Datuk Seri Abdul Karim Rahman Hamzah said he was disappointed that the Bill was not tabled as scheduled this week after several Cabinet members wanted detailed clarifications from the Attorney General.

"My hope is that the Bill will not disappear but can be tabled in Parliament soon, if possible in the current session although it looks unlikely as this is the Budget session.

"Probably we might have to wait for the next parliamentary session," he told reporters after attending the inauguration of the Pehin Sri Adenan Satem Chair by Universiti Putra Malaysia (UPM) Bintulu here on Wednesday (Oct 27).

Karim said the proposed constitutional amendments were necessary to restore Sabah and Sarawak's rights under MA63 and provide a more accurate definition of federation.

"What happened to the Federation of Malaysia and to Sabah and Sarawak? That's why it needs to be amended," he said.

Karim added that the ministers who asked for more explanations should read the Bill instead if they did not understand it.

"To me, there is no need to seek further clarifications," he said.

Chief Minister Datuk Patinggi Abang Johari Tun Openg said he had no problems with the deferment of the Bill's tabling.

He said he was given to understand by Minister in the Prime Minister's Department Datuk Seri Wan Junaidi Tuanku Jaafar that several points needed to be clarified, particularly relating to the definition of federation in Article 160.

"There is no problem, it's just a matter of understanding and explanation by the Attorney General," he said.

The Bill was initially scheduled to be tabled at the Dewan Rakyat on Tuesday (Oct 26) followed by the second reading on Thursday (Oct 28).

However, Wan Junaidi said the Bill was deferred as some ministers did not agree to some of the terms, leading the Cabinet to decide to seek more clarifications from the Attorney General.