He added that Maqis was also always enhancing the efficiency of services to facilitate agricultural trade at the country’s main entry points and, thus help the country’s economic development.

"Maqis has also improved the methods of monitoring imports and exports by strengthening standard operating procedures as well as implementing entry control of agricultural products for transit and transshipment purposes,” he said in a statement on Friday (Oct 22).

Earlier, he had visited the Bangunan Sultan Iskandar (BSI) Customs, Immigration and Quarantine (CIQ) Complex to see the import and export operations of the country’s agricultural products to Singapore.

He said that Maqis ecorded 37 arrests involving attempts to smuggle in and out agro-food products without permits with an estimated value of RM1.35 million from early in this year until Sept 30.

Kiandee then added that his Ministry was finalising several proposed amendments to the Malaysian Quarantine and Inspection Services Act 2011 (Act 728) to expand the scope of powers of Maqis outside quarantine centres, quarantine stations and quarantine premises

He said the powers would involve raids, investigations and detentions outside the country’s entry points.

"The amendments will also strengthen jurisdiction for the purpose of biosecurity control over all agricultural commodities related to import and export activities, inter-provincial transfers as well as transits and transshipment,” he said. - Bernama 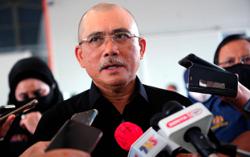