SIBU: A 37-year-old man who pleaded guilty to arson has been sentenced to two years' jail by the Sessions Court here.

Sessions judge Marutin Pagan, in passing the sentence on Friday (Oct 22), ordered that the jail term of the accused, Andrew Sanggau, take effect from the date of his arrest on Oct 13.

The accused was charged under Section 436 of the Penal Code for causing mischief by setting fire to a house.

According to the facts of the case, the unnamed complainant was at work at 12.12pm on Oct 13 when his employer told him that his rented house at Lane 5, Bukit Lima Timur, had been set on fire by an unknown person.

He rushed home and saw firemen trying to douse the flames. However 90% of his belongings were destroyed in the fire including clothes, kitchen utensils, dishes and his children's school books.

Total losses were estimated at RM9,000.

Police investigations found that three of the complainant's neighbours witnessed the incident, with one of them using his mobile phone to record a video of the accused entering the premises.

Andrew then reportedly removed a mattress and set fire to the house.

Acting on information received from the public, a police team went to a house in the same area and arrested Andrew at about 5pm the same day. 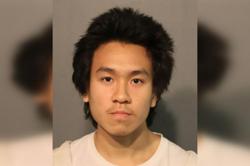