GEORGE TOWN: Many Indian Muslim eateries in Penang are critically short of staff as locals are not interested in joining while Covid-19 pandemic travel restrictions prevent foreign workers from entering the country.

“With the interstate travel ban lifted, we have a lot of local and outstation customers, but we could not serve them due to a lack of staff.

“During the movement control order (MCO), some businesses had no choice but to send their workers back home to reduce costs.

“Now that we have more customers, we need more manpower too,” he told a press conference in front of Hameediyah Restaurant in Campbell Street here on Friday (Oct 22).

Mohamed Rizwan added that there are always vacancies for locals but the jobs were not taken up.

“For locals, the minimum wage is RM1,800 and some employers will pay Socso and EPF.

“Local employees are only required to work eight hours a day and we will give them overtime if they work extra hours.

“There are around 200 big and small Indian Muslim restaurants in Penang.

“We need roughly 20 workers for each outlet, which is around 4,000 workers at any one time.

“Prior to the MCO, we might only need 10 employees to run the operation but now, we need to add on at least four workers just to take care of the SOPs,” he said.

On Friday, The Star reported that Malaysian Indian Muslim Restaurant Owners Association (Presma) president Datuk Jawahar Ali Taib Khan said there are many vacancies at most Indian-Muslim restaurants, which need an estimated 10,000 locals in managerial and supervisory roles, and 20,000 to 25,000 foreign workers for operations.

“I was informed that an agency called around 400 candidates to attend interviews from 9am to 3pm.

“Sadly, not even one turned up,” he said.

“Some foreign workers left before the MCO and they are unable to come back due to the travel restrictions.

“Since the interstate travel ban was lifted, we serve around 800 to 1,000 customers every day, including dine-in and takeaway. 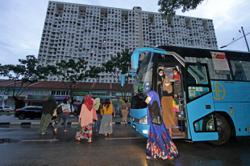