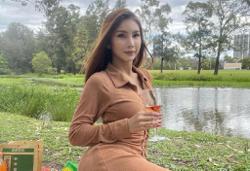 PETALING JAYA: Police have not received any report claiming that controversial cosmetics entrepreneur Nur Sajat (pic) was sexually assaulted by enforcement officers during her arrest earlier this year, says the Selangor CPO.

Comm Datuk Arjunaidi Mohamed said police only received a report that Nur Sajat was allegedly roughed up during the arrest by Selangor Islamic Religious Department (JAIS) officials in January.

“We opened an investigation under Section 323 of the Penal Code for voluntarily causing hurt. There was no mention of any sexual assault or molest in the report,” he said, adding that the investigation is ongoing.

Nur Sajat, who has revealed that she is currently residing in Sydney, was quoted in The New York Times as saying that she was touched inappropriately by JAIS officials during her arrest.

“They think it was justified because they perceived me as a male person,” the 36-year-old transgender entrepreneur was reported to have said.

Nur Sajat said her mother was present during the incident and witnessed at least three officers manhandling and molesting her at the time.

The news report stated that her mother confronted the officers over their behaviour but the officers allegedly told her that their actions were acceptable as Nur Sajat was “a man”.

He said the department would leave the matter to the police to investigate, adding that JAIS has also filed a police report to state what had actually transpired during the incident.

“If there is any wrongdoing by JAIS staff, the police will take action because allegations of sexual harassment are not under my scope of authority, but the police.

“JAIS will never defend its staff found to have been involved in forms of wrong-doing,” he said when contacted by Berita Harian yesterday.

Nur Sajat was said to have been on the run for the last few months after a blasphemy charge was levelled at her in Malaysia for dressing as a woman.

She was reportedly detained and fined by Thai authorities on Sept 8 for having an invalid passport. She was later believed to have sought refuge through the United Nations High Commissioner for Refugees.