PETALING JAYA: A landowner in Hulu Selangor has been ordered to stop earthworks near Sungai Remok to prevent pollutants from affecting the river’s water quality.

The Selangor Water Management Authority (LUAS) said that some silt and sediment from a reservoir within the area had already made its way into Sungai Remok.

Findings from samples taken from the river showed that 20 Nephelometric Turbidity units and 18 mg/l of total suspended solids were present in the water under conditions without rain.

"Nevertheless, the open surface can cause increased murkiness during heavy rain and is a risk without proper sediment control and silt traps.

"LUAS issued a Water Protection Order under Section 122 (1) Selangor Waters Management Authority Enactment 1999 for the landowner to put an immediate stop to the flow of pollutants and take sediment and silt control measures due to the risk of affecting water quality," LUAS said in a statement Wednesday (Oct 20).

LUAS said that the source of pollution to the nearest water intake at the Batang Kali Water Treatment Plant was approximately 5.15km and no shutdown of the water treatment plant was reported.

The statement added that the privately owned 8ha piece of land was being cleared for agriculture use and while planning permission was given by the Hulu Selangor Municipal Council (MDHS) for the construction of planting sites and a temporary structure, no permission for earthworks was approved.

The landowners were also issued a compound from MDHS under 70A (1) of the Street, Drainage and Building Act 1974 for carrying out earthworks without permission. 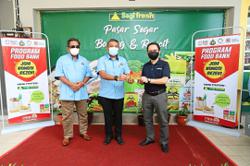 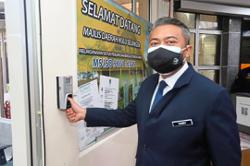 MTC wins best Government Council Award for sustainability and CSR
Not enough being done to prevent teens from dropping out of school to get married, says Ahmad Faizal
Sarawak Polls: 18-year-olds will not be able to vote, says Wan Junaidi
My Mind On Film 2021 submission deadline: Dec 31, 2021
Sentencing guidelines launched for forest crimes in Sabah
Efforts to eradicate underage marriage on Parliament agenda on Thursday (Dec 2)
Covid-19 Watch: 97% of Malaysia's adult population fully vaccinated
Covid-19 Watch: 65 students at Cyberjaya boarding school test positive
Do you know... about aquaplaning?
Air traffic services will be on par with developed countries