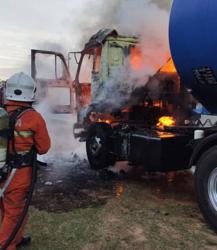 GEORGE TOWN: Two old shophouses in Air Itam were badly damaged after they caught fire at about noon on Monday (Oct 18).

Two cars parked nearby were also damaged in the fire.

"We received a call about the fire in Jalan Air Itam at 12.32pm," the Fire and Rescue Department said in a statement.

"Firemen from Paya Terubong and Jalan Perak rushed to the scene and were assisted by voluntary firemen from nearby branches.

"Two shop units were involved in the fire with 80% destroyed.

"Two cars were also set ablaze in the fire.

"However, no casualties were reported," the statement read.