GEORGE TOWN: A wild boar, which was put down after giving the authorities the run-around for half an hour, could have come from the forest areas on the west of Penang island.

There was a possibility that the beast had lost its way after venturing out from its habitat in search of food, said Universiti Sains Malaysia wildlife biodiversity and conservation expert Prof Dr Shahrul Anuar Mohd Sah.

“The (wild boar) could either be from the forest areas near Penang City Park or Penang Botanic Gardens.

“It probably lost its way while looking for food,” he said.

Prof Shahrul Anuar recalled a case in 2017 in which a herd of wild boars became an attraction of sorts at the foothills outside Penang Botanic Gardens.

“They drew crowds that included lottery punters after dark,” he said yesterday.

Prof Shahrul Anuar advised the public not to disturb any wildlife, adding that they must report any displaced wildlife in their area to the authorities.

Earlier yesterday, the animal that led authorities on a chase through several neighbourhoods was put down by the Penang Wildlife and National Parks Department (Perhilitan).

According to a statement, the wild boar was cornered at the bushes near the Anjung Gurney Hawker Centre at 9.40am yesterday.

Penang Civil Defence Force operations officer Kapten Muhammad Aizat Abdul Ghani said the animal had to be put down to keep it from disturbing public order and endangering lives.

He said the wild boar was seen roaming near Pulau Tikus market and the seafront promenade along Gurney Drive earlier in the morning.

He said five Civil Defence Force members reached the area at 9.12am but failed to catch it.

“We then sought help from Perhilitan,” he added.

Kapt Muhammad Aizat said no one was injured and there was no damage to public property during the operation. 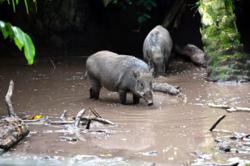