In a statement Monday (Oct 11), the state secretary said all of them except those who had resigned would continue with their respective roles for the time being, following the dissolution of the 14th state assembly by the Yang di-Pertua Negeri Tun Mohd Ali Rustam on Oct 4.

Kamel said although the Melaka constitution did not specifically provide for the functions and roles of the caretaker government, based on the conventions in the parliamentary democracy system in the Commonwealth, it only served to govern a country or state until a new government was formed.

"In that case, the caretaker government cannot make any binding decisions and policies or take any action that can have financial implications and burden the new government that will be formed, unless the action must be implemented in the public’s interest.

He said it also includes continuing the implementation of existing policies and programmes for which financial allocations have already been made; making any agreements, contracts and undertakings based on policies which have been approved by the state government or provisions approved by the state assembly, such as the current year's budget.

Apart from that, he said the caretaker government could hold and attend official functions that had been scheduled for a state government project or programme.

In a separate statement, Kamel said the state government denied allegations by former Sungai Udang assemblyman Datuk Seri Idris Haron that there was third-party interference in matters and decisions made by the state executive council, as it was a final and collective decision.

"On the specific allegation that there was interference by Melaka Umno liaison chairman (Datuk Seri Ab Rauf Yusoh) and the allegation that the state executive council’s decisions had to be referred to a third party before being implemented, the Melaka state administration denies such claims.

"It is not true that all decisions need to be referred to a third party either before, during or after the meeting," he said.

Kamel said the Melaka state administration also took seriously Idris' accusation that the state executive council was selective and racially biased in making its decisions, adding that it always took into account the interests of all the people of Melaka, irrespective of race and religion.

"In this regard, the Melaka state government is examining whether there has been a violation of the oath of secrecy, and if that is so, the state government will not hesitate to take legal action," he said. - Bernama 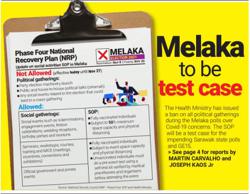