Deputy Public Prosecutor Harris Ong Mohd Jeffery Ong in his submission said this was because both accused failed to determine whether the money they allegedly received as "donations" were from unlawful or illegal sources.

Harris also read out excerpts of the judgment in Najib’s case where the former prime minister was found guilty of criminal breach of trust, abuse of position and money laundering involving RM42mil of SRC funds.

He highlighted High Court Judge Mohd Nazlan Mohd Ghazali’s ruling which said that it was hard to believe that Najib had not known or had reasonable suspicion that the monies deposited into his accounts were proceeds of unlawful activity.

On Tuesday (Oct 5), he submitted that Omar Ali, being the agent, received instruction from Ahmad Zahid to convert RM7,511,250.20 into 35 cheques which the accused subsequently handed over to Messrs Lewis & Co, a trustee of Yayasan Akalbudi belonging to the former deputy prime minister.

Harris further said that Ahmad Zahid had the power to manage and utilise the monies by way of purchase of shares and bungalows at Country Heights in Kajang, Selangor.

"My Lord, buying bungalows had nothing to do with charity, as claimed by the defence. There was no evidence to show that the money was spent for charitable purposes, except for the fact it was for the accused’s benefit,” he said in his submission to rebut the defence’s argument on 27 money laundering charges before judge Datuk Collin Lawrence Sequerah.

On the involvement of law firms being used "to launder money", the prosecutor said it was a serious issue that did not just happen here but everywhere around the world.

Harris said that the prosecution has adduced credible evidence on each essential ingredient of the money laundering offences, which were unshaken despite cross-examination.

"The evidence from direct, circumstantial and documentary evidence led in the trial warrants the accused to enter his defence on all charges of money laundering,” he said.

Ahmad Zahid, 68, is facing 47 charges - 12 for CBT, eight for corruption and 27 for money laundering - involving tens of millions of ringgit belonging to Yayasan Akalbudi.

The prosecution will continue its submission on Oct 11. - Bernama 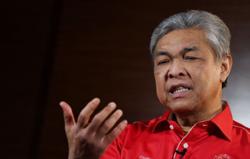