A MAN in Kaohsiung, Taiwan, was reimbursed TW$2,479 (RM373) by his insurance company after being bitten in the genitals by a centipede, reports China Press.

The man, known only by his surname Ye, wrote about the ordeal online, saying that it happened one day in August while he was sleeping naked on the floor after cleaning his room.

He woke up after feeling a sharp pain in his groin, only to find that a centipede had clamped shut its mandibles on his testicles.

“I was shocked and I initially wanted to slam a book down onto the centipede but quickly realised why I should not do it,” he wrote.

Ye tried pulling the centipede away but to no avail.

Unable to bear the pain any longer, Ye rushed to the hospital and limped to the emergency room for treatment. He later called up his insurance agent and told the woman what had happened, and was surprised to find out that he was entitled to reimbursement for loss of work due to an accident.

Ye’s insurance agent said that she had not heard of such an incident in her 10 years in the industry.

She explained that being bitten by a centipede was a rare event, and was classified as an accident, hence, Ye was entitled to an accident claim.

> A new list containing names of 25 ‘problematic’ celebrities who have been banned in China surfaced recently on Chinese cyberspace for reasons such as ‘political problems’, ‘flouting of law’ and ‘depravity’, reports China Press.

Topping the list is Zhao Wei, whose presence has been scrubbed clean from the Internet in the mainland since August.

According to the list, Zhao, who is a billionaire, fell under the category of celebrities with ‘political problems’. Other notable names include actress Fan Bingbing who was charged with tax evasion in 2019 and singer Kris Wu who is currently being investigated for rape.

Veteran martial arts superstar Jackie Chan’s son Jaycee Chan, also made the list as he was earlier jailed for the possession and distribution of marijuana. Additionally, the younger Chan had also accommodated drug users at his apartment in Beijing.

Fan, Wu and Chan were labelled as having ‘flouted the law’.

Celebrities who were categorised under ‘depravity’ included Taiwanese actor and singer Show Lo who cheated on his ex-girlfriend with multiple women, and actress Li Xiaolu who was found to have engaged in an affair with a rapper. 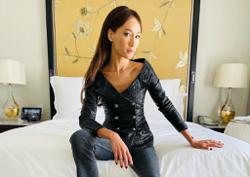