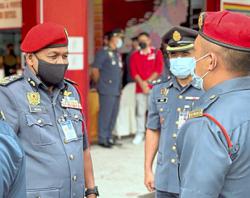 KOTA KINABALU: A crocodile prowling in monsoon drains next to a vocational college here has been trapped by Wildlife Rescue Unit rangers.

The 2.1m reptile was caught after it went after bait set inside an iron trap the rangers had placed in a monsoon drain near Likas Vocational College.

According to Sabah Wildlife Department assistant director Dr Sen Nathan, the trap was set on Monday (Sept 27) after the college informed the unit that a crocodile had been spotted in a nearby drain on Sept 25.

"Rangers carried out round-the-clock monitoring for the crocodile and by Wednesday (Sept 29), it was caught," Dr Sen said.

Dr Sen noted that there was a growing number of crocodile and snake sightings in the state capital, particularly after the heavy downpours earlier this month.

The recent heavy rains and flooding are believed to have caused many crocodiles to make their way from the wild and rivers deep in forest reserves towards the city, he added.

On Wednesday, the rescue unit helped residents in Kolombong here remove a non-venomous yellow trinket snake that had slithered into a house.