People in the major towns of Sandakan and Tawau as well those in the districts of Kinabatangan, Telupid, Tongod, Kalabakan, Papar, Semporna and Nabawan will not be allowed to leave their districts until 60% of their adult population is vaccinated.

The people in the nine districts who have yet to achieve the 60% vaccination of its adult population will not be allowed to move out of their respective districts.

"These districts have to remain as ‘standalone’ districts outside the zones until they achieve the 60% fully vaccinated condition," he added.

Meanwhile, Masidi said all economic and sports activities will be allowed to operate from 6am to 10pm as part of further relaxation on standard operating procedures (SOP) in the state with effect Oct 1.
Article type: metered
User Type: anonymous web
User Status:
Campaign ID: 46
Cxense type: free
User access status: 3
Join our Telegram channel to get our Evening Alerts and breaking news highlights 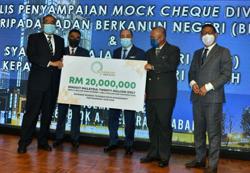