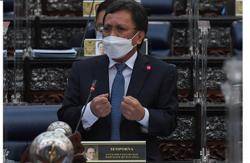 During the "One Year GRS Government with the People" event here, Chief Minister Datuk Seri Hajiji Noor also announced that RM3.83bil state revenue had been collected as of Aug 31 this year.

"This figure has surpassed the target set for this duration," he said.

Among the contributing factors was an agreement reached for oil and gas company Petronas to start paying sales tax to the state immediately, right after Hajiji assumed the Chief Minister's post.

"I would like to announce that as of August this year, RM1.07bil has been collected from this sales tax, while RM177.8mil was collected last year," said Hajiji.

Meanwhile on the GRP policy, he said the initiative was aimed at reforming regulatory practices to include new regulations and existing ones to improve government delivery practices.

"The implementation of Sabah's GRP will enhance the delivery system and reduce bureaucracy.

"For example, we target it will expedite assistance dealing with the people, approval of development plans as well as entry of investments.

"The transformation of administration based on this policy will support the efforts for economic recovery and towards making the Sabah Maju Jaya (SMJ) effort a success," he added.

Hajiji said among the functions are to strengthen cooperation between government and non-governmental organisations, the corporate sector as well as other bodies, in finding funds and channeling contributions to those in need.

"The foundation will be professionally managed by trained employees to ensure transparent distribution of aid to target groups.

"Today (Wednesday), some early donations will be received from several government-linked companies (GLCs) and corporate entities to help with the planned programmes," said Hajiji who is also the chairman of the board of trustees for Yayasan Kebajikan Sabah.

During the event, 11 entities presented contributions totalling RM12.1mil to the foundation.

Hajiji also thanked the federal government for all the assistance channeled to Sabah, which includes Covid-19 management and economic recovery initiatives.

"To date, the federal government has distributed RM256.9mil to the state Health Department and RM110mil through the National Disaster Management Agency (Nadma) for handling Covid-19 matters," he added.