Azalina said it was perplexing that the government had decided to proceed with its appeal despite Johor Ruler Sultan Ibrahim Ibni Almarhum Sultan Iskandar urging the government against it.

"I don't understand why in this issue of citizenship, the Johor Sultan supports the High Court, but the government decides to appeal.

"I'm a lawyer and the Speaker (Datuk Azhar Azizan Harun) is also a lawyer. I'm confused," said the recently resigned Dewan Rakyat deputy speaker during her speech on the 12th Malaysia Plan in Parliament on Wednesday (Sept 29).

On Sept 9, the High Court ruled that Malaysian women have the same right as Malaysian men to confer automatic citizenship on their overseas-born children.

However, an appeal was filed by the government on Sept 14.

Azalina said the government must be fair to all genders on this matter.

"If automatic citizenship isn't allowed for Malaysian women for their overseas-born children, then the same should be applied to men too.

"It is as though women in this country are in some ways lesser than men. Please don't be offended, I'm only asking," she quipped.

Nga Kor Ming (PH-Teluk Intan) then interjected and said Pakatan Harapan supports Azalina's calls to the government to withdraw its appeal on the case.

Azalina also responded in jest to Nga: "And I will support YB as the third deputy speaker."

Nga is among those tipped to be appointed to fill the vacated deputy speaker post in the next Parliament meeting in October.

Home Minister Datuk Seri Hamzah Zainudin previously stated that the government intended to solve the issue by amending the Constitution to allow Malaysian mothers the right to confer automatic citizenship on their children born outside Malaysia. 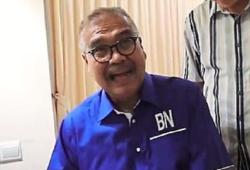