Wee calls for closer ties among all MPs

One for the album: Dr Wee with Baru at the Banquet Hall of Parliament. — Photo from Dr Wee’s Facebook page

PETALING JAYA: The cooperation shown by lawmakers from both sides of the political aisle should be continued for the good of the people, says Transport Minister Datuk Seri Dr Wee Ka Siong.

“For a prosperous, inclusive and sustainable Malaysia, I hope the close relationship of MPs regardless of their political leaning can be continued so that the people can prosper,” he said.

In a series of Facebook posts yesterday, he added: “Listening to the tabling of the 12th Malaysia Plan by Prime Minister Datuk Seri Ismail Sabri Yaakob.”

Dr Wee shared several pictures of himself with other lawmakers from both sides, including one with Selangau MP Baru Bian.

He added that he had been sitting with the former works minister while hearing a briefing by Minister in the Prime Minister’s Department Datuk Seri Mustapa Mohamed and the director-general of the Economic Planning Unit. 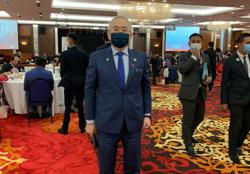