A total of 14 deaths and three new clusters were also reported.

"Kuching reported the highest number of deaths at six, followed by Serian, Betong and Sibu with two each,while Sri Aman and Bintulu reported one death each," the committee said in a statement.

The committee said the clusters involved a longhouse in Sungai Merusa, Subis; a logistics company in Haidah, Bintulu; and a village in Kanawa Baram, Marudi.

It also said a total of 45 compound notices were issued for SOP violations, with 38 in Kuching, three each in Bau and Miri, and one in Padawan. 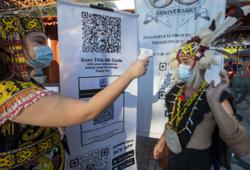