BANGI (Bernama): A company which produces plastic products was fined RM30,000 by the Sessions Court here Wednesday (Sept 22) for failing to ensure the safety of its workers, resulting in the death of one of them in an incident two years ago.

Judge Effandi Nazila Abdullah meted out the fine on Ryoka (Malaysia) Sdn Bhd, which was represented by its human resource manager KS Letchumi, 44, who pleaded guilty to the charge.

The company paid the fine.

According to the charge sheet, Ryoka was charged with failing to ensure the safety, health and welfare of workers by failing to provide training in injection moulding process to its staff, Azman Abdullah, 29, who was killed while fixing the company's machine two years ago.

The company was charged under Section 15(2)(c) of the Occupational Safety and Health Act 1994 which provides a maximum fine of RM50,000 or imprisonment for up to two years, or both, upon conviction.

Earlier, lawyer R. Maran, representing Ryoka, during mitigation, said the company, which has been operating for more than 30 years, had compensated the deceased's family.

The prosecution was conducted by Idris Abdul Rahman, prosecuting officer from the Selangor Occupational Safety and Health Department. - Bernama 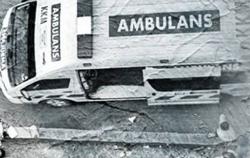