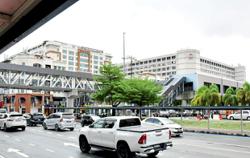 KOTA KINABALU: Centre Point Sabah will not be able to proceed with the construction of a connection linking its building to the multi-million ringgit Sky Bridge this year as a portion of the shopping complex's funds have been used to fight Covid-19.

Centre Point general manager Megan Liu said that the pace of business had slowed down for many of the mall's tenants, while some have had to close their shops as they were unable to sustain operations.

“As such, the allocated budget for connecting the KK Skybridge project has been utilized for that purpose, and also for several charity projects such as the food bank programs, blood donation campaigns, and sponsorships to frontliner personnel,” she said in a statement on Saturday (Sept 18).

“Hence, the management of Centre Point Sabah Shopping Mall has decided to postpone the construction of linking to the KK Skybridge to next year, with the support from over 400 business owners of the mall,” Liu added.

She also said that the movement control orders and the closing of borders have led to a lack of visitors to Sabah in general and the shopping complex specifically.

“The current situation shows that it is not possible for businesses to recover and would only deteriorate further this year,” she said.

Liu said that she hopes local authorities such as the City Hall and state government could consider helping in terms of allocating some funds for the construction of the entrance.

She said the management has decided to put the plans to construct the opening linking the Skybridge first, and to focus on helping mall operators get back on their feet.

Liu also called on the public to pay more attention to the needs of hospitals and frontliners battling this pandemic above other matters first given the increasing number of cases in Sabah.

She said that many quarantine centres are almost full and medical facilities are lacking essentials such as intensive care beds and an oxygen supply.

“The management’s current project is to contribute some of these medical facilities to hospitals,” she said.

Those who are interested in donating may contact the marketing event team, Winnie or Zia at 0117 412 8785, or to send an email to info@centrepointsabah.com, she added.

Earlier, mayor Noorliza Awang Alip said according to the initial agreement between the mall and the state, the construction of the opening from Centre Point Mall would be done six months after the project is completed.

This RM31.5mil project is a 440-metre Sky Bridge equipped with escalators, an elevator for the disabled and 20 kiosks connecting Asia City, Api-Api Commercial Centre, Warisan Square and Oceanus Mall among other facilities.

Construction of the bridge started in April 2017, but was halted in between works due to financial constraints among other reasons, and was only completed this year and opened to the public officially on Sept 9. 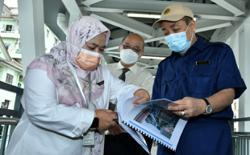 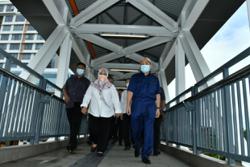