KUCHING: Over 60% of 16- and 17-year-olds in Sarawak have been vaccinated against Covid-19 so far, says Chief Minister Datuk Patinggi Abang Johari Tun Openg.

"We are on track to achieve our target of fully vaccinating those aged 16 and 17 years before the reopening of schools on Oct 3.

"So they will be safe in terms of vaccination when they go back to school," Abang Johari told reporters after visiting the Dewan Majma vaccination centre here on Thursday (Sept 16).

He said those aged 12 to 15 years with no health problems were expected to be fully vaccinated by the end of October.

Sarawak began vaccinating teenagers in stages on Sept 8, starting with those aged 16 and 17 as well as 12- to 15-year-olds with comorbidities.

To date, 234 schools in the state have been involved in the teen vaccination programme, including private schools, religious schools and Mara Junior Science Colleges.

Abang Johari expressed his thanks to parents for their cooperation in the inoculation programme and giving consent for their children to be vaccinated.

"I would also like to thank the schools and teachers involved as well as the volunteers in the programme," he said.

He added that the state's target was to have the majority of the population, including teenagers, fully vaccinated by the end of the year.

As of Sept 15, 65.8% of the state's total population have received both doses.

The Chief Minister also said Sarawak was on the way towards the endemic phase of Covid-19 based on its low hospitalisation rate and the majority of cases being in Categories One (no symptoms) and Two (mild symptoms).

He said the state disaster management committee's decision to exempt fully-vaccinated individuals from quarantine upon arriving in Sarawak from other parts of Malaysia was a step towards preparing for the endemic phase.

"Whether or not the endemic phase can be declared depends on the national authorities as they have to look at the whole nation," he added. 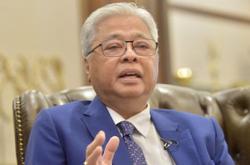