KUALA LUMPUR: Two out of the 47 corruption charges faced by Datuk Seri Dr Ahmad Zahid Hamidi concern a sum of RM13mil that was used to build a mosque and a tahfiz in Bagan Datuk, the High Court was told.

Lead counsel Hisyam Teh Poh Teik, representing Ahmad Zahid, said the prosecution's own star witness, Junaith Asharab Md Shariff, had testified under oath that the cheques were given not as a bribe or inducement.

"It was his (Junaith's) personal contribution or donation for religious and charitable purposes," he said here on Wednesday.

Hisyam submitted to the court on the 12th and 13th charges faced by Ahmad Zahid at the end of the prosecution's case where the Umno president is facing 47 charges – 12 for criminal breach of trust (CBT), eight for corruption and 27 for money laundering – involving tens of millions of ringgit belonging to Yayasan Akalbudi.

For Charge 12, Ahmad Zahid was said to have received 13 cheques amounting to RM8mil through Junaith from Syarikat Mastoro Kenny IT Consultant & Services as an inducement for him to assist the company to obtain MYEG Sdn Bhd projects in 2016.

For Charge 13, Ahmad Zahid was accused to have received 10 cheques from textile company Berani & Jujur Trading amounting to RM5mil through Junaith, also for assisting Mastoro Kenny in obtaining MYEG projects in 2017.

MYEG projects were under the purview of the Home Ministry, of which Ahmad Zahid was the minister at that time.

Hisyam said Junaith's testimony refuted these allegations of corruption as the witness confirmed during cross-examination that payments made through the 23 cheques involved were meant for "charitable and donation purposes".

"In fact, upon cross-examination, the witness confirmed that the accused had never promised him any MYEG project.

"Therefore, the allegations that the cheques were given as inducement for the accused to secure projects for Mastoro Kenny are unfounded," Hisyam said. 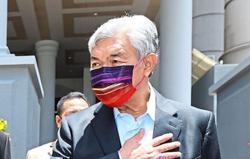