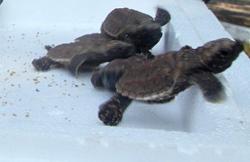 PORT DICKSON (Bernama): A total of 32 baby hawksbill turtles were rescued after being found wandering on the sidewalk of Batu 4 beach here by members of the public.

Negri Sembilan Fisheries Department director Halimi Abu Hanip said the hatchlings were rescued by an individual named Jezzrel Pereira and his friends who happened to pass by the location at 2am on Friday (Sept 10).

“Due to their concern for the safety of the animals, they quickly rescued the hatchlings and released them into the sea.

"The incident was also reported to the Civil Defence Force and our department.

“Following the report, a team from the Port Dickson Ornamental Fish Centre and Civil Defence Force rushed to the scene to find any remaining young turtles and successfully rescued another hatchling,” he said when contacted on Saturday (Sept 11).

Halimi also thanked Jezzrel and his friends for their swift action, adding that this was the second incident in Port Dickson after the first one occurred in Bagan Pinang beach in August.

He explained that sea turtles would hatch at night before making their way to the water.

However, baby turtles faced greater threats, especially on the Port Dickson beach, as the area was a tourist attraction and they could get crushed by vehicles or humans.

“Baby turtles also face the risk of being eaten by dogs and birds or collected by irresponsible people,” he said.

The endangered species was protected under the state's Fisheries (Turtles and Turtle Eggs) Rules 1976 and Fisheries Act 1985, he added.

“We hope the release will increase the number of green and hawksbill turtle landings one day,” she said. – Bernama