Its director Ady Ermanty Haniff Mohamed Hanif said the elephant, estimated to be around 15 to 20 years old, was caught at about 5pm on Monday by Kelantan Wildlife Elephant Capture Unit.

“The operation was carried out following complaints from villagers that a herd of eight wild elephants were on a rampage, destroying crops around Kampung Bukit Ipoh, Belimbing, Dendong and Kampung Air Berching in Jeli, since last July.

“Earlier, we implemented some measures including installing blue LED lights and conducting a series of shooting operations to scare and divert the elephants into the nearby forest,” he said.

Ady Ermanty said despite the on-going measures by Perhilitan for almost a month, the elephants still roamed around, causing RM63,000 in losses due to damaged crops.

The herd is believed to have wandered from the Gunung Basor Forest Reserve, which has a habitat for over 30 wild elephants. — Bernama 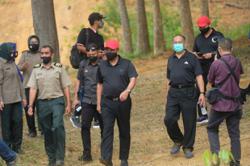