GEORGE TOWN: A director of the Engineering Department of a local authority and a contractor were remanded for five days to assist an abuse of power investigation involving about RM200,000.

The remand order, from Tuesday until Aug 14, was issued by senior assistant registrar Nur Fardrina Zulkhairi after allowing an application from the Malaysian Anti-Corruption Commission (MACC) at the Magistrate’s Court here yesterday.

The two suspects, aged 41 and 48, were arrested the day before at the Penang MACC headquarters.

They were there to give statements regarding an alleged proposal to the Kedah Procurement Board to appoint the company owned by the director’s father to carry out resurfacing and maintenance work on roads in a district in the state.

The offence under Section 23 of the MACC Act 2009 carries a maximum jail term of 20 years and a fine of five times the value of the bribe or RM10,000, whichever is higher, upon conviction.

The duo, represented by lawyer Parmjit Singh, arrived at the George Town Court Complex at about 10am dressed in MACC lock-up attire and handcuffed.

They were accompanied by several MACC officers. — Bernama 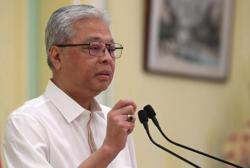