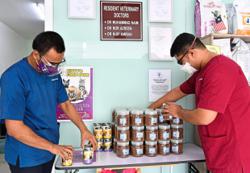 Nur Uzzma Qistineena said she faced a huge challenge when she started her mission to rescue cats.

“My initial challenge was allergies. Before this I could not hold or look at a cat without having a sneezing fit. My face would swell up and my body and eyes would itch,” she said.

She said it took her about a year to overcome her allergies before she could hold a cat.

Besides abandoned cats, she and her sister have also rescued injured cats and nursed them back to health.

Nur Uzzma Qamarieena said that she and her sister also feed stray cats in several spots in Kuantan.

> A team from the Kelantan Wildlife and National Parks Department (Perhilitan) spent 10 hours rescuing a tapir that had fallen into a ditch at an orchard in Kesedar Baru Chenulang, Kuala Krai on Friday, BH Ahad reported.

Kuala Krai Perhilitan chief Azhan Ab Razak said the 13 officers began their operation at about 10.30am and rescued the animal from the ditch at about 8.30pm.

Azhan said the male tapir, weighing about 200kg, was unhurt and transported to Sungai Relau in Taman Negara where it was later released.

He advised members of the public to contact Perhilitan if they come across wildlife needing rescue.

> Health authorities in Kedah are investigating the death of a 38-year-old man who collapsed next to a car in Taman Tunku Hamimah, Sungai Petani, Metro Ahad also reported.

The incident was said to have happened at about 9am on Saturday when a cleaner spotted the victim – Mohd Shahir Shafie – collapsing while walking towards a launderette.

Kuala Muda Deputy OCPD Supt Anuar Abd Rahman said the cleaner then called the hospital when the man remained motionless on the ground.

Supt Anuar said the man died at the scene and that the area had been sanitised.

He said state health authorities would be doing a Covid-19 test on the body before the post-mortem. 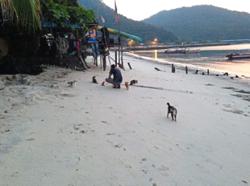