JOHOR BARU: Police are trying to identify a masked suspect whose act of lighting a house on fire was recorded and the video has since been making the rounds on social media.

In the 29-second clip, a man in black can be seen flinging two plastic bags over the front gate of a house in Skudai here before setting it on fire and darting into a getaway car.

Johor police chief Comm Datuk Ayob Khan Mydin Pitchay said the 36-year-old victim and his family were asleep and unaware of the incident when it took place.

“The victim then received the video clip via WhatsApp from an unknown number at around 10.30am on Aug 2.

“Prior to that, the victim had also received threats about his brother’s alleged debts but the latter denied borrowing money from anyone,” he said.

Comm Ayob Khan also said the plastic bags were believed to be filled with petrol.

The victim suffered about RM300 in losses as a result of the fire.

Investigations are ongoing under Section 436 of the Penal Code for causing mischief by fire with intent to destroy. 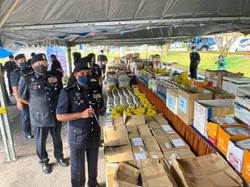