Difficult times: Wong is pleading to the public to help her raise funds to pay for her daughter Chloris’ medical bills after surgery to treat a hole in her heart.

JOHOR BARU: It has been tough for single mother Wong Hui Ling, whose daughter is suffering from a congenital heart disease.

Wong, 25, said her 18-month-old daughter, Chloris O Wen Ning, was born at Hospital Sultanah Aminah here with a ventricular septal defect and needed surgery to close the hole in her heart.

However, Chloris was too young to undergo treatment at the time and had to depend on medication.

She was only referred to the National Heart Institute (IJN) for check-ups and treatment after she turned a year old.

“After travelling back and forth from Johor to Kuala Lumpur for three check-ups at IJN, I was told that my daughter needed surgery as soon as possible.

“She was admitted to IJN on July 19 and after undergoing two surgeries, she was monitored in the intensive care unit.

“Initially, I was told that my daughter’s medical costs would amount to around RM55,000.

“However, the doctors then found her condition to be more serious and complicated than anticipated, so the fee was increased to about RM70,000,” she said.

Besides worrying about her only daughter’s health, Wong, who used to work odd jobs to get by, was stressed as she could not afford the hefty medical bills, especially after the Covid-19 pandemic left her without any source of income.

Wong, who hails from Pontian, has sought help from the Malaysia Da-Ai Charity Welfare Association, a non-governmental organisation that has been involved with charity work for the past four years, to raise funds to foot her daughter’s medical fees.

She added that her daughter was discharged on July 28 and was currently resting in a small rented room in Kuala Lumpur to enable her condition to improve before she could return to Johor.

“After Wong approached us for help, our team conducted an interview and home visit to check on her situation before publicising her case on social media,” Ng explained.

“Our association actually helped her pay some of the medical bills beforehand, as we did not want to risk any delay to Chloris’ treatments.

“We will continue with the fundraising as there is still another RM15,000 in medical costs to go.

“In the event that the amount raised exceeds the billed amount, it will be channelled towards our association’s activities for the less privileged such as food aid distribution, funeral arrangements especially for Covid-19 patients, medical bills and providing medical equipment,” she added. 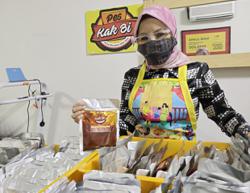