Up in smoke: The fire at Kg Bariawa Ulu consuming the homes in Keningau.

KOTA KINABALU: A lit mosquito coil was believed to have started a fire that destroyed three houses in Kampung Bariawa in Keningau.

Firemen said a victim told them that she had woken up to the smell of smoke at about 4am yesterday and saw flames under her bed, where she had placed the mosquito coil.

It is learnt that she woke up her family members and alerted her neighbours to leave their houses.

The fire spread to two other wooden houses but did not cause injury.

State Fire and Rescue Department public relations officer Mohd Affendy K. Ramin said they got the call at 4.34am, but the fire had completely destroyed the houses when firemen arrived.

He said nine firemen in three fire engines brought the fire under control at about 5.28am.

Separately, two other houses – one in Kampung Batu Putih in Kinabatangan and the other at Teck Guan Villain Lido here –were also destroyed by fire.

No injuries were reported in both incidents. 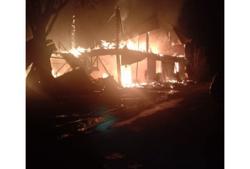