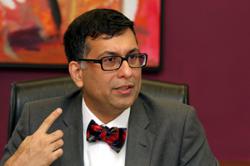 An internal circular by the Archdiocese of Kuala Lumpur noted that Archbishop Emeritus Pakiam's condition has been classified as Category 3 (minor symptoms with pneumonia).

“While the medical team has started him on medication to treat the pneumonia, his condition remains stable and he currently does not require supplemental oxygen therapy.

“However, as a precaution, his medical team has decided to observe him in the Intensive Care Unit (ICU) for the time being,” it said in the communique dated Sunday (Aug 1).

In a separate communique dated July 30, it noted that Pakiam was admitted to Assunta Hospital after a positive result on the Covid-19 rapid antigen test.

It also noted that Pakiam received his second vaccination dose in June.

Pakiam was the third archbishop of the Roman Catholic Archdiocese of Kuala Lumpur.