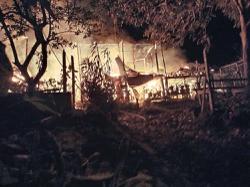 Firemen at the scene who spoke to a victim said she had told them that she had woken up to the smell of smoke just after 4am.

She saw a fire from under her bed, where she had placed a lit mosquito coil before she went to bed hours before.

The fire spread to two other wooden houses but did not cause any injuries.

It is learnt that the victim had woken up her other family members and screamed for the neighbours to leave their houses as well.

State Fire and Rescue Department public relations officer Mohd Affendy K Ramin said they were notified of the incident at 4.34am but could not save the three structures as they were already fully engulfed in fire when help arrived.

“Three fire engines were dispatched together with nine firefighters,” he said, adding that the fire was brought under control at 5.28am while operations ended at 6am.

Meanwhile, two other fires were also reported - one in Kampung Batu Putih Kinabatangan at 5.58am, and the other at Teck Guan Villa in Lido near Kota Kinabalu just after midnight on Sunday.

Each report involved the burning of a house and no injuries were reported as well.