Of those arrested on July 29, 222 individuals were slapped with compounds while six were remanded.

He said enforcement officials had ordered 67 premises to close for failing to comply with standard operating procedures.

“On Ops Benteng, enforcement authorities reported to have arrested an illegal immigrant and seized five land vehicles,” he said on Friday (July 30).

Hishammuddin said that 686 individuals had returned to Malaysia on July 29, and all were sent to observe mandatory quarantine at government-designated stations.

Since July 24 last year, a total of 259,203 individuals had returned and were sent for quarantine at 83 hotels and 11 training institutes nationwide.

He also said that the enhanced movement control order placed on several localities in Sabah will be lifted on July 29.

The Domestic Trade and Consumer Affairs Ministry enforcement team carried out 1,848 special checks on premises to check on SOP compliance. 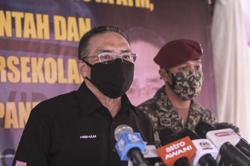